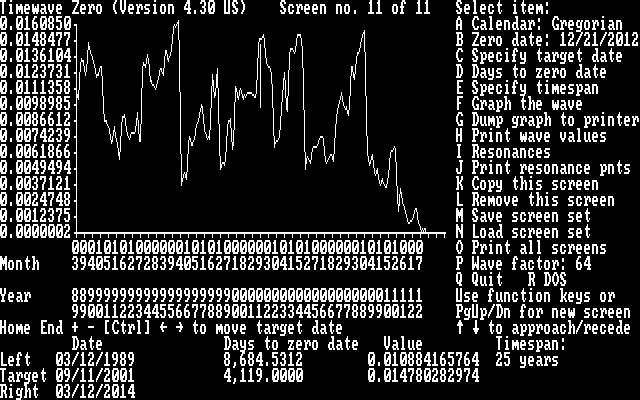 Terence Kemp McKenna (November 16, 1946 – April 3, 2000) was a writer, philosopher, and ethnobotanist. He is noted for his many speculations on the use of psychedelic, plant-based hallucinogens, and subjects ranging from shamanism, the development of human consciousness, and novelty theory.

One of McKenna's ideas is known as Novelty theory. It predicts the ebb and flow of novelty in the universe as an inherent quality of time. McKenna developed the theory in the mid-1970s after his experiences in the Amazon at La Chorrera led him to closely study the King Wen sequence of the I-Ching. Novelty theory involves ontology, extropy, and eschatology.
The theory proposes that the universe is an engine designed for the production and conservation of novelty. Novelty, in this context, can be thought of as newness, or extropy (a term coined by Max More meaning the opposite of entropy). According to McKenna, when novelty is graphed over time, a fractal waveform known as "timewave zero" or simply the "timewave" results. The graph shows at what time periods, but never at what locations, novelty increases or decreases.


Considered by some to represent a model of history's most important events, the universal algorithm has also been extrapolated to be a model for future events. McKenna admitted to the expectation of a "singularity of novelty", and that he and his colleagues projected many hundreds of years into the future to find when this singularity (runaway "newness" or extropy) could occur. Millenarians give more credence to Novelty theory as a way to predict the future (especially regarding 2012) than McKenna himself. The graph of extropy had many enormous fluctuations over the last 25,000 years, but amazingly, it hit an asymptote at exactly December 21, 2012.

In other words, entropy (or habituation) no longer exists after that date. It is impossible to define that state. The technological singularity concept parallels this, only at a date roughly three decades later. According to leading expert Ray Kurzweil), another concept called cultural singularity (essentially cultural dissolution, or language dissolution, as in the novel Just a Couple of Days), parallels this as well.

The timewave itself is a combination of numerology and mathematics. It is formed out of McKenna's interpretation and analysis of numerical patterns in the King Wen sequence of the I Ching (the ancient Chinese Book of Changes). This concept first took root in his entheogenic experiences shared by him and his brother Dennis McKenna as documented in the book True Hallucinations. The theory is clearly based in numerology and takes shape out of McKenna's belief that the sequence is artificially arranged as such purposefully. Mathematically, the sequence is graphed according to a set of mathematical ratios, and displays a fractal nature as well as resonances although it was not captured in a true formula until criticism from mathematician Matthew Watkins (see below). McKenna interpreted the fractal nature and resonances of the wave, as well as his theory of the I Ching's artificial arrangement, to show that the events of any given time are recursively related to the events of other times.

As the theory was never published in a peer-reviewed journal and McKenna's sources and reasoning were primarily what would be considered numerological rather than mathematical by professional mathematicians and scientists, the theory has failed to gain any (scientific) credibility or much recognition. However, McKenna was highly critical of such fields for adhering to what he saw as a flawed Occidental paradigm, and did not seek to create a theory acceptable to the mathematical community. The theory was, however, revised by nuclear physicist John Sheliak after a flaw was discovered by Matthew Watkins. The new revision is often referred to as Timewave One, but is also included in the set of alternate waves in the Timewave Zero software. It is claimed that this new version is more closely matched to history.[citation needed]
Timewave Zero received a great deal of its public attention through the publications of R. U. Sirius, particularly the cyberculture magazine Mondo 2000.

Novelty theory has a few basic tenets:
That the universe is a living system with a teleological attractor at the end of time that drives the increase and conservation of complexity in material forms.
That novelty and complexity increase over time, despite repeated set-backs.
That the human brain represents the pinnacle of complex organization in the known universe to date.
That fluctuations in novelty over time are self-similar at different scales. Thus the rise and fall of the Roman Empire might be resonant with the life of a family within a single generation, or with an individual's day at work.
That as the complexity and sophistication of human thought and culture increase, universal novelty approaches a Koch curve of infinite exponential growth.

That in the time immediately prior to, and during this omega point of infinite novelty, anything and everything conceivable to the human imagination will occur simultaneously.

That the date of this historical endpoint is December 21, 2012, the end of the long count of the Mayan calendar. (Although many interpretations of the "end" of the Mayan calendar exist, partly due to abbreviations made by the Maya when referring to the date, McKenna used the solstice date in 2012, a common interpretation of the calendar among New Age writers, although this date corresponds to such an abbreviation rather than the full date. See Mayan calendar for more information on this controversy.) Originally McKenna had chosen the end of the calendar by looking for a very novel event in recent history, and using this as the beginning of the final 67.29 year cycle; the event he chose was the atomic bombing of Hiroshima, which gave an end-date in mid-November of 2012, but when he discovered the proximity of this date to the end of the current 13-baktun cycle of the Maya calendar, he adjusted the end date to match this point in the calendar.

This End of History was to be the final manifestation of The Eschaton, which McKenna characterized as a sort of strange attractor towards which the evolution of the universe developed.

His predictions for this transcendent event were wide ranging and varied, depending on his audience, and different times he conjectured the following: the mass of humanity would, by means of some technology, become mentally conjoined in a great collective; the moment in which time travel became a reality; the birth of self-conscious artificial intelligence; a global UFO visitation; and occasionally he even expressed doubt whether anything at all would happen. However, McKenna claimed that there was no contradiction between these scenarios, as they might all happen simultaneously.
[edit]Similar ideas

McKenna repeatedly describes human cultural development as a succession of historical periods which are "compressed" versions of each other. In this manner, he describes an overall acceleration of human cultural development, which he likens to a "tightening spiral" approaching what he describes as the "transcendental object at the end of the universe".
The acceleration of human cultural development has been observed by other philosophers and historians, perhaps most notably Ray Kurzweil in his Law of Accelerating Returns.
See also Stuart Kauffman and his concept of "The Adjacent Possible"
Robert Anton Wilson has the theory of The Jumping Jesus Phenomenon, which he describes at an hour and a half long seminar given in 1988 titled "The Acceleration of Knowledge". He also theorizes that information has doubled over history, and that these doublings come faster and faster. The Jumping Jesus Phenomenon has more of a philosophical and historical basis than a scientific one, though many parallels between his theory and Timewave Zero can be drawn.