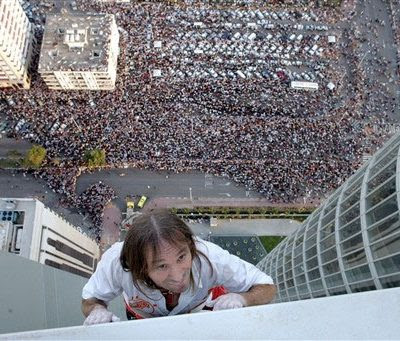 Alain Robert (born as Robert Alain Philippe on 7 August 1962), is a French rock and urban climber, from Digoin, Saône-et-Loire, Bourgogne, France. Nicknamed after the Marvel Comics character "Spider-Man," or "The Human Spider" he is famous for scaling skyscrapers.

Alain Robert climbing Petronas Tower 2 in March 2007
Robert has scaled 85 giant structures around the globe including many of the world's tallest structures, most of which he has scaled using only his bare hands and climbing shoes.

Robert began climbing as a young boy, scaling rock cliffs in the area around his home. His buildering career began at the age of 12 when he forgot his keys and was locked out of his parents' eighth-floor apartment. Instead of waiting for them to return home, he simply scaled the exterior wall to his home.

In 1982 he suffered two accidents, the first in January at the age of 19 and the second in September at the age of 20. He fell 15 metres (49 ft) on both occasions. He suffered multiple fractures and now suffers from permanent vertigo. The doctors considered him 60 percent handicapped and told him he would not be able to climb again. However, within 6 months he was climbing again. He kept taking on more and more challenging structures and improving his skills. He polished his rock-climbing skills in the French Alps before turning to buildings.

Because authorities will not normally give him permission for such dangerous exploits, Robert usually appears, at dawn, on the side of whichever giant skyscraper he has chosen to climb. His exploits attract crowds of onlookers who stop to watch him climb, in awe of what is happening. As a consequence, Alain has been arrested many times, in various countries, by law enforcement officials waiting for him at the end of his climb. The arrests and trials are normally little more than brief formalities and he has always been discharged.

Robert's physical conditioning and expert climbing technique allow him to climb using the small protrusions of building walls and windows (such as window ledges and frames). Many of his climbs provide him no opportunity to rest and can last over an hour. At 1.65 m (5'5") tall, he is short and light, attributes that enhance his dexterity while climbing. He sometimes has a small bag of climbing chalk powder (similar to powdered rosin), which is used to absorb sweat, fastened around his waist.

Robert's urban climbing career has been characterized by an ever-expanding list of famous landmarks which includes the Eiffel Tower, the Sydney Opera House and the Montparnasse Tower in Paris, as well as the world's tallest skyscrapers. In the 1990s, as his exploits brought him worldwide media exposure, speculation began as to whether or not he would attempt the tallest building in the world at the time: the Petronas Twin Towers in Kuala Lumpur, Malaysia. Although Malaysian authorities were expecting his attempt, they were still astonished when one day in 1997 he suddenly appeared several floors up on the side of the tower. He was eventually arrested at the 60th floor, 28 floors below the top.

While scaling the Sears Tower in Chicago, Illinois in 1999, he encountered the most challenging climbing conditions in his career. Near the top of the 110-story building, a thick fog set in that covered the glass and metal wall of the last 20 floors with moisture, making it dangerously slippery. Although the climb became agonizingly slow and very strenuous, Alain Robert overcame the difficulties and reached the top.

It has become more frequent for Robert to be paid to scale buildings as part of publicity efforts. In May 2003 he was paid approximately $18,000 to climb the 95 metres (312 ft) Lloyd's of London to promote the premiere of the movie Spider-Man on the British television channel Sky Movies.

On October 19, 2004, he scaled the 187 metres (614 ft) headquarters of the French oil company Total while wearing a Spider-Man costume.

Robert scaled Taipei 101 on December 25, 2004, a few days before its grand opening as the tallest building in the world. The 508 metres (1,667 ft) climb was legal, part of the week's festivities. The skyscraper's outwardly slanting sides posed no apparent difficulty for him, but heavy rains in Taiwan resulted in a climb lasting four hours--double his estimate.

On September 1, 2006, he climbed the tallest building in Lithuania and the Baltic States - Europa Tower, 148 metres (486 ft), in Vilnius. Wearing a black suit and using a safety rope, which he detached several times, he reached the observation deck of the building, 114 metres (374 ft), in 40 minutes. In 2006 he also climbed Torre Vasco da Gama in Portugal as part of an advertisement for Optimus, a national mobile operator. He finished the year climbing the Santa Fe World Plaza in Mexico City, on December 7th. On 23 of February 2007, he legally climbed the headquarters Building of Abu Dhabi Investment Authority (ADIA) on the coast of Abu Dhabi city (United Arab Emirates).

On March 20, 2007, he again climbed the Petronas Twin Towers, marking the tenth anniversary of his previous ascent of this building. Upon reaching the 60th floor, he allowed himself to be apprehended . He flew the Malaysian flag and drew applause from waiting police, fire crew, and media representatives before handing himself in. He was handcuffed and escorted off the premises before being driven to a police station.

On May 31, 2007, he scaled the 88-story Jin Mao Building in Shanghai, then China's tallest skyscraper, once again wearing a Spider-Man costume. Robert was later arrested and jailed for 5 days before being expelled from China. In November 2007, Robert was invited by the local government of Zhangjiajie, a scenic region in the southern province of Hunan, to climb the 1,518 metres (4,980 ft) Tianmen mountain to boost the profile of the region and bring in tourists.

On September 4, 2007, he climbed the 244 metres (801 ft) Federation Tower office building in Moscow, (Russia's tallest skyscraper), in 30 minutes using a ladder. Detained by police, he could face a fine for violating safety norms at a construction site despite being told by his sponsor that permission had been granted for him to climb safely.

On December 18, 2007, he climbed the 29-story Portland House office building in London, (Westminster's tallest building). It took him just over 40 minutes. Police taped off the area and later arrested him for criminal damage and wasting police time.

On April 15, 2008, he climbed the 60-story Four Seasons Place in Hong Kong. The police and 4 fire engines were standing by and it took him almost 1 hour to reach the top. Alain encountered difficulty at the top when he found that the last 5 metres were impossible to climb. He had to climb sideways until he reached a corner and managed with difficulty to reach the top. He almost fell when a woman on the other side of the glass screamed and almost fainted. Witnesses said that he was detained upon completing the climb. He stated that his climb was intended to increase awareness of global warming.

On June 5, 2008, he climbed the New York Times Building in New York City, USA. He unfurled a banner with a slogan about global warming, and then was arrested by police on the roof. The banner read "Global warming kills more people than 9/11 every week" At the time, he was wearing a sweatshirt advertising his website: TheSolutionIsSimple.org

In a 2005 interview, Alain Robert said that he has fallen seven times in his life. The worst was his second fall in 1982.
On January 18, 1982, at 19, he fell 15 metres (49 ft) when his anchor and rope gave way during training. He fractured his wrists, heels and nose and underwent three operations.

On September 29, 1982, at 20, he fell 15 metres (49 ft) when his rope came undone during rappelling, (abseiling). He was in a coma for five days and fractured both forearms, his elbow, pelvis, and nose. His elbow was also dislocated and a nerve was damaged leaving him partially paralyzed. He also suffered cerebral edema and vertigo. He underwent six operations on his hands and elbow.

In 1993, he fell 8 metres (26 ft) while showing students how to rely on their legs when climbing. He kept his hands behind his back on an easy route but lost his balance and fell headfirst shattering both wrists. He went into another coma and spent two months in the hospital.

In 2004, he fell 2 metres (6.6 ft) when climbing a traffic light whilst posing for a photo in an interview. He landed on his elbow and needed forty stitches, but a month later he climbed the world’s tallest skyscraper, Taipei 101, as part of its official opening week.

On November 22, 2005, he was arrested as he began to climb the One Houston Center building in Houston, Texas. He was charged with criminal trespassing and misdemeanor possession of a controlled substance. The controlled substance charge was due to two pills that the police found in his possession. He claimed the pills were the prescription drug Urbanyl, a medication used to prevent epileptic seizures. He spent two days in jail and then appeared in court on November 29 and provided proof of a doctor's prescription for the medication, asking that the drug charges be dropped. On December 20 he climbed the Cristal Tower in Paris in protest of the arrest. His next court appearance was scheduled for January 4, 2006, but Robert said that he would be climbing in Mexico at that time.

On March 15, 2006 he climbed one of the 122 metres (400 ft) Mercurial Towers in Bagnolet in protest of the presumed seven-day sentence, prior to returning to Texas to serve the sentence. On March 31 he appeared before a Houston court. The drug charge was dropped because of the valid prescription, and the jail sentence was reduced to one day and a $2000 fine for trespassing. The previous time served in November was credited so Robert did not have to serve any more time in jail.
On May 31, 2007, after scaling the 88-story Jin Mao Building in Shanghai, he was arrested and jailed for 5 days before being expelled from China.

On February 27, 2008 he climbed the Edificio Italia, one of the tallest buildings in Brazil despite being unauthorized to do so. He was detained by the police after his successful attempt.
On April 15, 2008, he climbed the 60-story Four Seasons Place in Hong Kong. According to witness reports, he was detained by police upon completing the climb.