how to build a dream machine 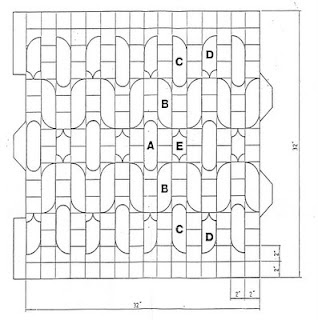 The plan below is for a 78 rmp dreamachine. See below the drawings of the plan

for the explainations for a 45 rpm dreamachine.

- 1 record player working at the speed of 78 tours/minute,

- 1 big cardboard sheet, rigid enough for the future cylinder to stand up, and soft enough to be easily cut and worked; you can get sheets of different thickness and dimensions in an office stationery. Choose the darkest colour you can find as the cardboard must be opaque to the light of a 100 watts bulb.

1 tape measure to measure the circumference of the turn table of the record-player,

PRINCIPLE OF THE DREAMACHINE

To build a dreamachine, you need a cylinder with holes in it, fixed uppon the turntable of a record player turning at the speed of 78 tours/minute.

In the middle of the machine, one 100 watts bulb. When you seat in front of the machine, the light of the bulb must come in front of your closed eyes intermittently, according to a rythm from 7 to 13 light-flashes per second, which is the rythm of alpha waves of the brain.

- The rythm of the light flashes is from 7 to 13 flashes/second.

- The turntable of the record-player turns at the speed of 78 tours/minute = 78 tours/60 seconds.

- 1 flash correspons to a hole in the cylinder.

1. Measure the circumference of the turntable with the tape measure.

2. Transfer this dimension on the length of the cardboard sheet from the left side at the top and at the bottom of the sheet. Draw a line joining the 2 points, parallel to the width of the sheet.

3. Once the line is drawn, draw another one, parallel to the first one, 4,5 cm on the right far from it; this is to delimit a little band which, at the end of the operations, will be stuck to the left width to make the cylinder. With the cutter, cut the sheet along the second line. So the final length of the cardboard is : 85,5 cm + 4,5 cm = 90 cm.

5. Now divide this width of 60 cm in 5 equal parts of 12 cm. Measure 5 times 12 cm on the right and left widths. Draw the lines joining those new points. You get 4 new lines, parallel to the length.

* Measure 10 times this dimension at the top and at the bottom of the upper row, in beguinning by the left.

* Draw the lines joining the new points : you get 9 parallel lines 8,55 cm far from one another (these lines will be in the middle of the holes) delimiting 10 rectangles of 12x8,55 cm.

* Take the plan of every hole : the line IJ represents the new lines you have just drawn. On this line IJ, measure 2 times 1,5 cm, from I and from J, so you get the points K and L. From these points, perpendicularly to IJ, measure the points A, B, C and D, 2 cm far from K and L. raw the lines joining A and B, B and D, D and C, C and A. The rectangle you get is the hole.

* Proceed the same way to get all the holes of the row. On the left width of this row, you only get half a hole. On the right side, at the end of the row, the last hole encroaches upon the band to stick; the second half of this hole will fit to the half hole on the left when you stick the cylinder, and this for every row. In other words, the left half hole and the hole at the right end of the row will make the same hole.

Every hole has the same dimensions, whatever the row may be.

7. Once you have delimited all the holes, cut them with the cutter. Put the cut pieces of cardboard aside, you will need them later on.

8. Put the cardboard sheet upon the turntable in giving a cylindric shape to it. Temporarily fix the 2 widths the one on the other with clothes pegs. Make sure the base of the cylinder fits with the dimensions of the turntable and that the left half holes fit with the holes of the right width. Do not stick the edges yet.

10. Go back to the cardboard sheet. Take the cut rectangles ABCD you had previously put aside, and solidly stick them at the bottom of the sheet on the width so you get little tongues to be fold and slipped perpendicularly under the rubber surface, to keep the cylinder upon the turntable. Put as many tongues as needed.

11. Your cylinder is ready. Stick the 2 widths one upon the other, maintaining the stuck band with the clothes pegs, in adapting them in the holes. Leave the pegs untill the cardboard and the glue are dry.

If the upper row is not perfectly circular, in cases the cardboard would fold over the holes, make the cardboard more solid in sticking the remaining little triangles ABCD inside the cylinder.

13. Then you take the bulb, the lamp socket, the electric lead and the male plug. Fix the whole lot together.

14. Put the dreamachine on a stool, near a power point, let the bulb hang in the middle of the cylinder without it to touch the edges. Adjust the length of the lead over the dreamachine in the most adapted way to the room where you are (you can pass the lead in a hook screwed in the ceiling, make a bracket system, etc...). The length of the lead must be adjustable, so the bulb can be put in front of every row.

15. Plug the bulb, plug the record player, turn it on in setting it on the 78 tours speed. Sit comfortably in front of the machine and approach your face the closest you can. Close your eyes and watch : you get inside your head mlulticoloured geometric and stereoscopic 360° images, and lights, the colors, shapes and designs of which constantly changes. You can vary the images in increasing or lessening the pressure of your eyelids andd the distance between your face and the machine and in experimenting the different rows.

A record has been specially made to be listened to while watching the dreamachine, its rythm is the same as the light flashes: "Heathen Earth", Throbbing Gristle (International Records), best in stereo with a headphone.

R/S: What's happening with the Dreamachine ? At one point ... you said it could have been the drugless turn-on of the 60s. Why didn't it happen ?

BRION : One of the reasons is that ... I think it scares people... Because of the cact that it deals with this area of interior vision which has never been tapped before. Except in history, one knows of cases - in French history, Catherine de Medicis for example, had Nostradamus sitting up on the top of a tower (which is now just being restored, at the present time, over there). And there was no pollution in those days... one didn't have any screen between the man on top of the tower and the sun. And he used to sit up there and with the fingers of his hands spread like this would flicker his fingers over his closed eyes, and would interpret his visions in a way which were of infuence to her in regard to her political powers.

Brion : They could also foretell bad things too. Peter the Great also had somebody who sat on the top of a tower and flickered his fingers like that in front of his closed eyelids... And any of us today can go and look out the window or lie on a field and do it, and you get a great deal of the type of visions - in fact, it's the same area of the alpha bands of excitation of the brain - within the alpha band between eight and thirteen flickers a second. And the Dreamachine produces this continuously, without interruption, unless you yourself interrupt it by opening your eyes like that.

So the experience can be pushed a great deal further - into an area which is like real dreams. For example very often people compare it to films. Well, who can say who is projecting these films - where do these films come from ? If you look at it as I am rather inclined to now - like being the source of all vision - inasmuch as within my experience of many hundreds of hours of looking at the Dreamachine, I have seen in it practically everything that I have ever seen - that is, all imagery. All the images of established religions, for example, appear - crosses appear, to begin with; eyes of Isis float by, and many of the other symbols like that appear as if they were the Jungian symbols that he considered were common to whole mankind.

And then one goes very much further - one gets flashes of memory, one gets these little films that are apparently being projected in one's head ... one then gets into an area where all vision is as in a complete circle of 360 degrees, and one is plunged into a dream situation that's occuring all around one. And it may be true that this is all one can see... that indeed the alpha rythm contains the whole human program of vision. Well - that is a big package to deal with - and I don't think anybody particularly wants ... amateurs sitting in front of Dreamachines fiddling with it , perhaps...

Learn more about Brion Gysin and the Dreamachine...